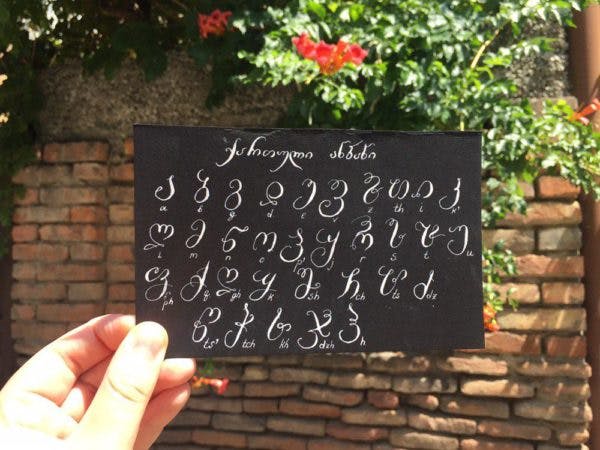 What languages are used in Georgia?

As Georgia is a country with a long and complicated history, no surprise that its culture is no less diverse and exciting than the chronicle of rulers changing each other. Historically Georgia was formed by various nations and it remains a country at the crossroads of influences and traditions. It is truly somewhere in between Western Asia and Eastern Europe. Its population consists of Georgians, Armenians, Azerbaijanis, Russians, Ukrainians, Syrian Arabs, and Turks. Do you see how diverse this country is?

For this reason, languages used in Georgia vary greatly. First of all, it is the Georgian language. Then there are Svan (a language of Svans, used in Svaneti, the north-western region of the country) and Mingrelian (a language of Mingrelians from the Samegrelo region). Since these two languages are not widespread, UNESCO designated them as “definitely endangered languages”. By the way, some Georgians from other regions prefer to say that Svan and Mingrelian are just two minor dialects of the Georgian language, but not independent languages (we wouldn’t recommend you repeat this out loud). Anyway, Mingrelians and Svans are very proud of having their languages. 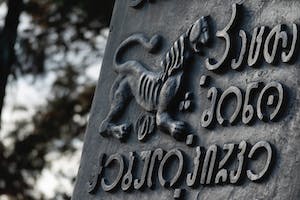 And finally, due to the strong Russian influence and Soviet heritage, many people speak Russian as well. For example, if you address a young person in their 20-30s, we suggest that you stick to English because the younger generation uses it a lot. But if you address an older person (45-70), he or she will probably know Russian better, and not English. We would say that nowadays 50-60% of Georgians speak or understand Russian on some level.

Interesting facts about the Georgian language

Georgian language (ქართული ენა) is one of the oldest languages in Europe: linguists believe that it appeared in the 1st millennium BC! Check out the article about 10 oldest languages still spoken in the world by a linguist Lani Seelinger, for example.

The Georgian language belongs to the Kartvelian language family, a mysterious group of languages that do not have a clear history. Linguists argue about the Kartvelian origin, as no relationship with any North Caucasian languages has been detected. The evolution of Georgian into a written language occurred in the 5th century. Since then, there have been three alphabets: Asomtavruli, Nuskhuri (the old ones) and modern Mkhedruli (with its verification for titles and headings, Mtavruli). The creation of these scripts is also full of puzzles and questionable theories. Some say it was “copied” from the Armenian alphabet. Others assume it was created as a mix of Aramaic, Greek and Coptic alphabets. Anyway, no one will deny its unique structure and incomparable beauty. 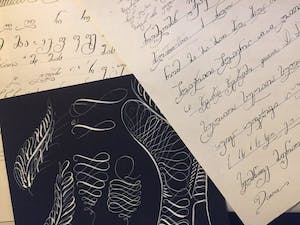 Today the Georgian alphabet consists of 33 letters. Each of them has a very elegant and elaborate shape, which looks like a pattern or lace. Letters are round and remind cute apples or lovely hearts. Sound of Georgian language is also quite outstanding: it has clear accurate vowels, soft consonants, and a couple of harsh fricative consonants (which sound a bit like a person has something stuck in the throat…). Nevertheless, Georgian is genuinely beautiful. And extremely hard to learn and pronounce. Not to mention the fact that its grammar system is ancient and complex, which makes learning Georgian a real challenge for anyone.

For those who are interested in linguistics or just want to impress local friends, we have prepared a shortlist of everyday phrases. This Georgian phrasebook will allow you to have short conversations in public places. It will also give you a lot of happy smiles from Georgians, as they adore when guests of their country try to speak their mother tongue, no matter what accent you have. Also, the good news is that Russian or English is quite enough for everyday usage. If you are not fond of learning languages and trying to pronounce the unpronounceable phrases, feel free to use them. People in Georgia are truly hospitable and understanding: they will do their best to understand you and let you know what they mean. 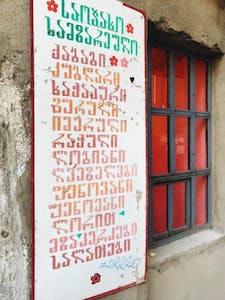 Feels a bit complicated? Don’t worry! Our local guides can help you to explore the town and teach you some basic phrases during Tbilisi Urban Adventures tour!

This tour is all about the best Georgian comfort food. Foodies rejoice, this is the Tbilisi food tour that you’ve been searching for!

Experience the unique charm of Tbilisi with a local guide by your side and discover picturesque architecture, top landmarks, and more.

Start the day with a picturesque walk through some of the city’s top sights along with a few hidden gems, and learn all about Georgian comfort food and enjoy a delicious local meal after.

By clicking or navigating the site, you agree to the FareHarbor Terms of Service and Privacy Policy, and to our partners’ use of data related to your use of our website. Like other websites, we use cookies and similar technologies to collect that data in order to deliver personalized advertising based on your interests. See Our Use of Cookies to learn more about your rights and our partners. Dismiss